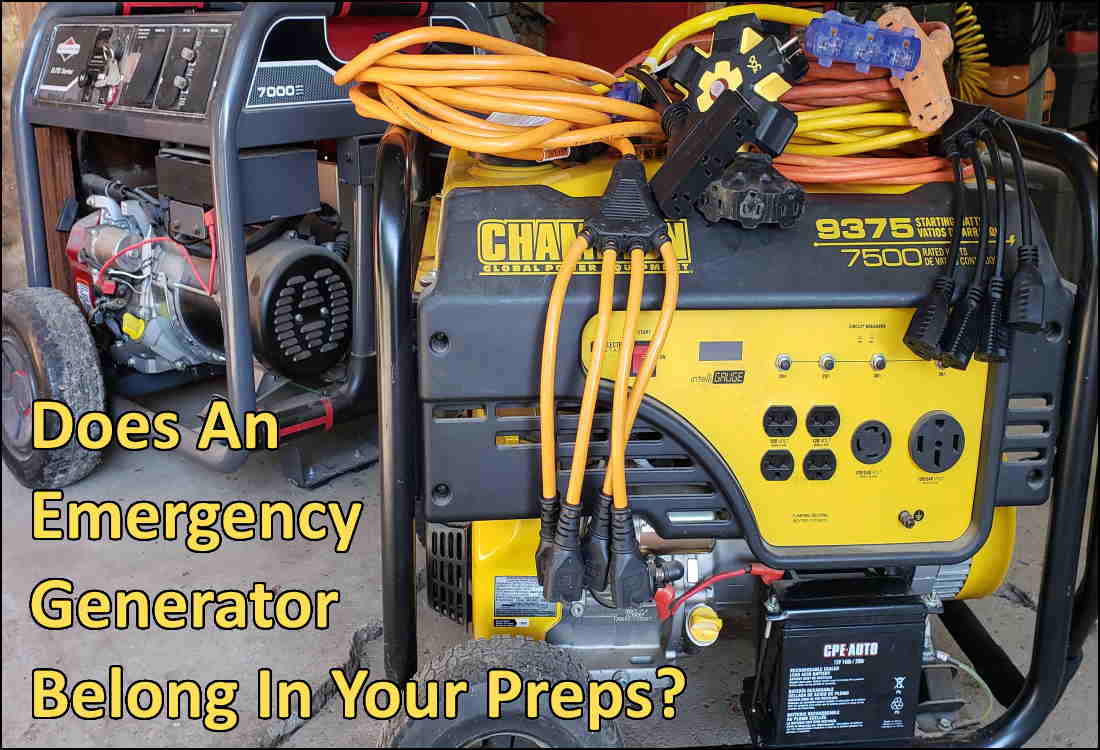 In part one of this two-part blackout kit series, A Basic Emergency Generator, I want to cover what I know about using a generator for the temporary but inevitable power outage.

The key phrase there is “What I know“. In other words, using a basic gas-operated emergency generator. Period. That’s what I have and use. Not a solar generator, whole house, or even an inverter generator.

While all of those sound like fantastic ideas, I want to stick to blogging about what I actually have experience with.

What you’ll get here is my story, what I learned, and how I think I can improve my own situation. Maybe that will help you. So here we go:

I understand that having a generator as a major part of your blackout kit might be a little out of reach for some but it plays such a huge role in our power outage preps that I want to start with it for the first part of this two-part series on building a blackout kit.

This weekend I’m cleaning up and updating our generator and blackout kit after a three-day power outage we just experienced. Now’s the perfect time to take photos. In my world, that means a blog post is coming.

Rather than explaining my story all over again, I edited a copy of something I shared with ​the Exclusive Prepper Website Email Group that I’m a member of. This is totally skippable if you’re in a hurry:

We lost our power last Sunday around 1 pm. It stayed off for three days, about 76 hrs.

My family thought I was crazy but I was excited about the training. I set up the generator to power a few lights, three refrigerators, and a deep freeze. We set up lanterns (battery-powered), a charging station, and even ran the wifi.

We cooked outside either on our grill, griddle, or two-burner outdoor stove. We also have a smoker but I didn’t use it. Coffee in the morning was made by heating a kettle on the propane stove and using a French press.

By the second day, I even hooked up the washer, dryer, and a small window air conditioner.

I learned that my generator while running that kind of load, needs about ten gallons of gas for 24 hours. That’s twice what I had planned so it was a useful lesson.

With the fifty gallons of gas I keep stored (As you’ll see in the Instagram photo below, I actually keep a little more than that as a buffer), I figured that I could run my generator for 60 days if I only ran it four hours a day (Just to keep the refrigerators and freezers going, charge all of our devices and whatever else we could get done in that time frame.) or ten days if I ran it twenty-four hours a day. Now I know I need to plan for half that time.

So to be clear, if it had been a serious issue I would have been running our emergency generator four hours a day while we worked to save the frozen and refrigerated food.

All in all, it was a cakewalk. I actually enjoyed the opportunity. We still went to work, washed our clothes, cooked every day, and lived life as normal.

Side note: We’ve been prepping so long I almost failed to realize others were struggling around us while we merely felt a minor inconvenience.

Once I heard that many of our neighbors lost all of their refrigerated and frozen food, after shrugging off a tinge of guilt, I realized this might make a nice topic for Next Step Survival – Building a blackout kit and how much our generator helped.

Why An Emergency Generator Is Probably A Good Idea.

I feel I need to address this prepping elephant in the room with their hands on their hips. Yes, elephants do that when they feel snarky. Trust me. LOL

Over the years I’ve heard many preppers explain away the need for a generator because,

In the event of a SHTF event, generators are going to attract the hoards to your ample cache of food and supplies and they’ll take everything you have.

Besides, everyone knows the power will be out for years and that generator will only last as long as your fuel holds out. Oh, and all the gas stations are going to be closed, along with all of the stores and roads.

So I touched on it in the email I just shared but with a ton of money tied up in frozen food, in the event of a long-term (Over a week) power outage, a generator would give me up to a month to begin canning, smoking, dehydrating or curing everything I could.

How Can I Improve My Emergency Generator Preparations?

I phrased it like that to avoid talking about solar power, which I’d love to have but I’m not there yet. ( That, and I’m trying to rank for that particular keyword 😉 ) Here’s one of the better posts out there if you’re interested in setting up solar power.

Wired to the home and/or running on natural gas.

One of the things that make me very nervous about my current setup is all of the gas I have stored. Fifty+ gallons of gasoline would probably be an issue in a house fire. Even stored in a separate outside shed doesn’t feel safe.

It looks like, according to the U of G (University of Google), converting my gas-powered generator to a natural gas generator is fairly inexpensive and simple to do.

Another downside to my power outage plan is all of the extension cords. We had cords everywhere. This is actually one of the reasons I was looking forward to getting a live exercise. I learned two things;

TIP: If you want to know what generators or extension cords work best, talk to a decent contractor that uses them on job sites every day.

Hooking an emergency generator to our home’s electrical box is far beyond my ability. I did have an electrician over on a different matter and he said I’d have to replace all of the wiring in my home first. Our home is Cir. 1950’s with screw-in fuses and two-wire electrical with no ground. That’s gonna hurt!

I’d love to have a whole-house generator someday but I highly doubt I’ll buy one. Even if I could afford it I’d have a hard time justifying that much money. My logic says I’m already going to save any future meat with one of my portable generators. So I can’t exactly justify a bigger one to do exactly the same thing.

So where’s the math in another $5K in a redundant albeit larger system? I ‘d rather put the five grand toward a decent solar setup.

Finishing Up – Was My Generator Free?

I just want to finish up on this note – the actual cost of our generator. I purchased this particular generator at least five years ago after my old one tried to give me a stroke. I wanted a generator with electric start.

I believe I paid a little under $800 at Costco when the generator went on sale.

In those five years, we’ve had a handful of power outages and we haven’t lost any food from any of them. That never really seemed that significant until last week.

Since the COVID, we decided to up our prepping game and began investing in meat. We bought a lot. We’re not the cause of the meat shortages last month but we were squeezing every ounce of meat we could into our freezers. We even bought a third refrigerator mostly for the freezer because new freezers were nowhere to be found.

My point is the generator easily saved us more money than it cost just in that single outage. That might not make the generator free but without it? I wouldn’t have a generator or all that meat. My win-win would have been a huge double loss. That’s math I can understand.

I’ll leave it there as far as an emergency generator and get to work on the other article on building a blackout kit. If you have anything you’d like me to address in that one, now’s the time to mention it. Leave it below in the comments.

Thank you,
Stay safe and prepared,
Hawkins Out.

Bonus Tip: Add A How-To Guide To Your Emergency Binder

I live with my wife and just in case I’m out of town in a local SHTF situation, I want her to be able to start our generator.

What? Still Hear? Fine, You Can Watch The Video. 😉

Heating Our Home In A Power Outage

Our Power Was Out. Here’s What We Learned – After Action Report (AAR)

EMP Attack – Is The Threat Of An Electro-Magnetic Pulse Attack Real?