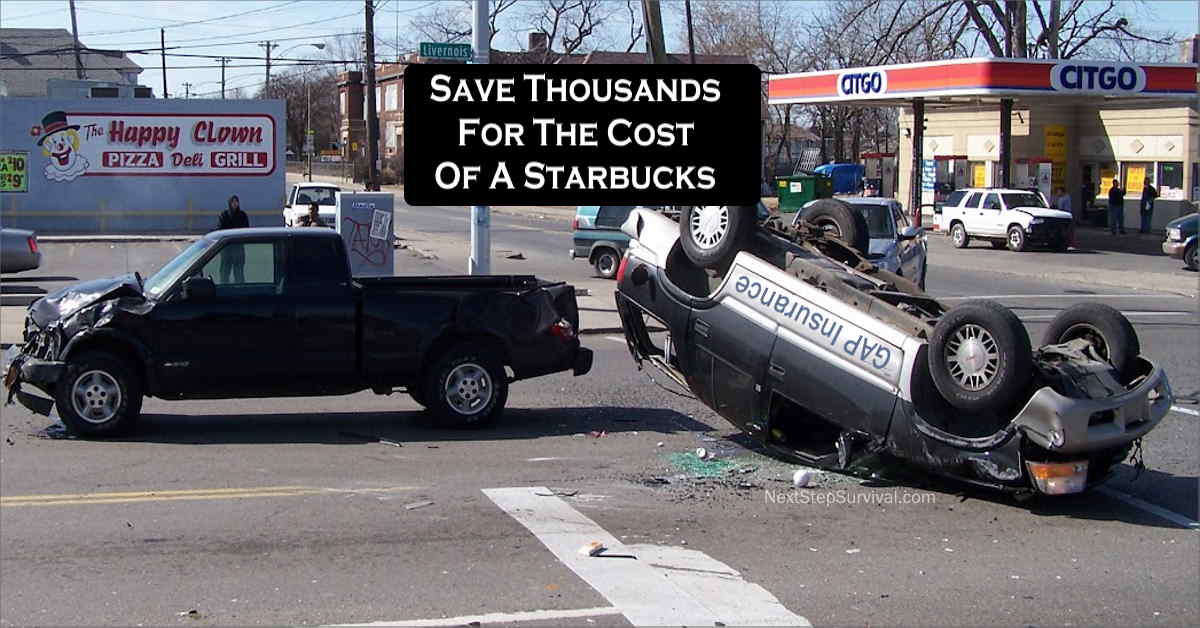 I’m going to tell you a short story about GAP insurance that probably saved me a couple of thousand dollars for less than the cost of a single cup of Starbucks.

I’ve been blogging for a long time, and occasionally I find myself on the Wayback Machine perusing some of my old dead websites. I’ve had over fifty websites and over two hundred domains over the years. Anyway, I wrote this one back on February 15th, 2008, and want to republish it right here, right now, because it’s still relevant.

In fact, me being an even more smarter blogger these days, I’ll even add on to the masterful article that withstood the test….. Never mind.

I almost published this article on my personal opinion blog but I reckon it’s relevant enough to a survival topic for Next Step Survival. It’s not going to save any lives but it can certainly make a difference in a few.

Alright, here goes that original article. I have an update to add but I’ll include that below. Keep, in mind, that this is a 14-year-old article when I’m referring to a 2006 Ford Taurus. We had that car for about two years at that point and were still making payments on it.

One last thing to mention. GAP insurance only makes sense when you’re still making payments on your vehicle/s.

By the way, as a side note, we no longer buy cars on credit. I buy used cars. One for my wife, one for me, and one for a backup. The savings on both insurance and payments are WAY more than the occasional car repair, which does happen. That’s why there’s an extra insured and plated car in my driveway.

Insurance is a boring subject but getting a great deal along with a piece of mind can help make up for it. Here’s the potential problem: My daughter was buying a minivan when it was involved in an accident.

No one was hurt but the van was totaled. She had full coverage auto insurance so no problem right? Wrong! And I mean a lot more wrong than a deductible.

I bet this issue has broad-sided many other people. She thought the insurance company would pay off her car minus the deductible. Then she would be able to simply buy a new car and start over. She was in for a very rude awakening.

The insurance company determined she owed about ten thousand dollars ($10,000) more than the vehicle was worth. They paid the actual ‘value’ of the car to the finance company and she was stuck with no car and a bill for ten grand!

Now, I’ve known for a while that our 2006 Ford Taurus is worth far less than what we owe and I certainly didn’t want to repeat her recent adventure. We called our insurance agent (yes there are still a few insurance agents) and asked what would happen if the same thing happened to us with our current policy. He said we were in the same boat. They would only pay the current value minus the $500 deductible.

Here’s the incredible part. He said we could purchase additional insurance, sometimes called Gap Insurance, that would cover the difference in the event the car was totaled.

Guess how much? I was expecting a huge premium increase for the extra coverage and I was way off. Can you believe we purchased Gap Insurance for two bucks a year?! Yes, for a lousy $2 my daughter could have saved herself $10,000 of misery. Of course, we now have the coverage and I really wish we could have learned that expensive lesson some other way. Two dollars is a small price to pay when you consider the money it might save.

I’m sure the premiums vary but it would certainly be worth looking into if you don’t already have the coverage. It kind of makes you wonder why they wouldn’t make it automatic. Oh wait, I forgot we were talking about insurance companies.

That is the end of the original article.

A Little Update – Back To The Present Day

What I didn’t include in that article, because it hadn’t happened yet, is my wife totaled that same car shortly after sharing that story. For less than two dollars, that little insurance tweak saved us a bunch of money.

When I called the insurance company, after they determined the car had indeed been totaled, I was given the amount that the insurance would cover. It was WAY less than what we still owed on the car (I wish I had recorded these numbers).

I stopped the insurance lady on the phone, “Wait a minute now, I thought that’s why I upgraded with GAP insurance.” After a moment of clicking away on her keyboard, I hear, “Oh, yes sir, I see that now. Well, it looks like we’ll be paying your car off after all.” And they did!

By the way, other than for business, I bought one more new vehicle since. I have to tell you, without a car payment or two, plus the full coverage insurance that goes along with it, and OnStar and whatever other subscriptions you want, prepper funds become a lot easier to find within our budget.

So if you’re still making a car payment and you know you’re upside down in the loan, which you almost always will be unless you’re very aggressive in pre-paying it down, I recommend you look into GAP insurance. It was a valuable lesson I learned from my daughter.

What You Need To Know About GAP Insurance

Ready to save more money? Here’s one from five years back:
Next Step: Survival Gear I Didn’t Need And Shouldn’t Have Bought