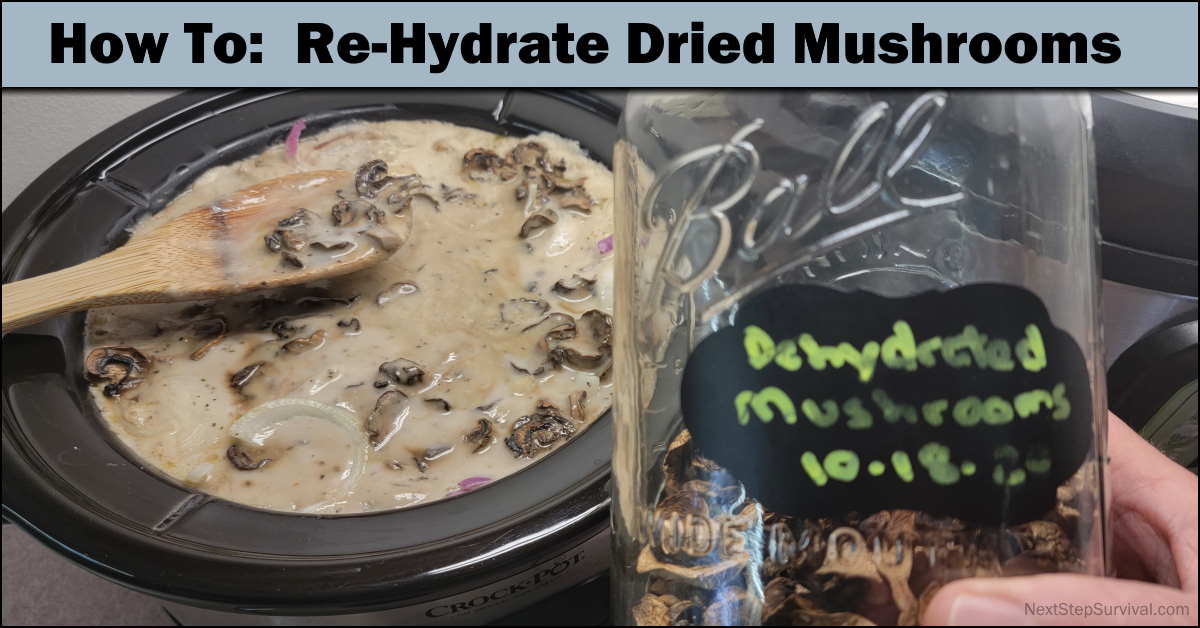 An article on how to rehydrate dried mushrooms? Absolutely, because dehydrating vegetables is a fantastic method of preserving for long-term food storage and your prepper pantry. If we’re going to dehydrate it, we need to know how to re-hydrate it.

By the way, rehydrating other vegetables works the same way. I just happened to be rehydrating mushrooms today.

How To Re-Hydrate Dried Mushrooms Video

How Long Will Dehydrated Mushrooms Last?

“How long will dried mushrooms last?” will be the first comment of the video so I want to cover that here. The answer, like everything else, is it depends.

If you dehydrate the mushrooms properly (I might record a video on that soon), keep them in a dark, cool location while vacuum-sealed in an air-tight container, I have no problem using them for a couple of years.

I know some people recommend you use them before six months to get the best freshness from them, and while I agree with that, it doesn’t mean they’re not perfectly safe beyond that.

Check the condition, look for any moisture and/or mold. If they look or smell like anything other than crinkly, dried-up mushrooms, I’d toss them.

Otherwise, rehydrate your dried mushrooms for cooking things like soups, stews, mushroom gravy, topping over chicken, fish, burgers, you name it. Dehydration is a wonderful way to store your fresh mushrooms long-term.

A Couple Of Tips BEFORE You Dehydrate Your Mushrooms

First, I soak the mushrooms in cold water for a bit. Then I pour that water out, replace it with fresh clean water and soak it a little longer. An hour and a half, we’re not talking days here and it’s not anything we need to be super precise with.

Second, I take the fresh mushrooms (Again, this is BEFORE I even dehydrate the mushrooms) and rinse them thoroughly using a strainer or colander. We loosened any dirt particles while soaking the mushrooms and now we’re washing that dirt away.

How To Prepare Dried Mushrooms for Cooking

I mentioned the soak and rinse process above because this is where I differ from many others when it comes time to rehydrate dried mushrooms.

I DO soak my dehydrated mushrooms but I don’t always rinse them. I’ve already cleaned and rinsed any dirt particles off before I dehydrated them so I’m not worried about dirt getting into our food.

I’ve read a couple of recipes where people say they rinse off the “gritty fine mushroom dust” after soaking. I’ve never had an issue with any grit. Fine mushroom dust should rehydrate (soften) along with the cut mushrooms. Even quicker actually. I’m guessing those people are running into a little dirt remaining after it has been dehydrated.

To me, over-rinsing mushrooms begin taking that hearty and full flavor we want from them. It’s like pouring some of that flavor down the drain, in my opinion.

Okay, as I mentioned, I do soak the dried mushrooms some of the time.

For instance, if I’m topping a burger with mushrooms or adding them to an omelet, I soak them first.

If I’m adding them to a soup or stew, for example, I don’t. They’ll rehydrate just fine while cooking with the dish and enhance the flavor as they do.

This isn’t complicated at all. I add the dehydrated (Notice I’m using ‘dehydrated’ and ‘dried’ interchangeably. That’s intentional because they are the same thing.) mushroom to a microwave-safe container, usually a coffee cup or Pyrex bowl or measuring cup (Depending on how many mushrooms I’m using).

NOTE: Don’t have or use a microwave? No worries, just use very hot water.

Be sure your dried mushrooms are completely covered with water or broth but don’t worry about any floating on top. They’ll be just fine.

The mushrooms still need to soak for at least half an hour and that container in the microwave is going to be hot. Just leave them in there to soak. The heat will work longer and you don’t have to worry about flies, counter space, or spilling it.

In case you didn’t catch it above, I’ll often soak the mushrooms in my chicken bone broth.

Personally, I’ll even keep that liquid, the broth, after I remove the mushrooms unless I’m adding it to something like a soup. I just throw it in a clean Mason jar with a lid and put it into the fridge. Now I make it a point to use that broth in a dish within the next two or three days. The flavor has been ‘enhanced‘ by the mushrooms. Trust me.

If you need to soak dehydrated food, or any food for that matter, using water from a lake, stream, pond, etc., you need to filter or boil that water BEFORE adding the food to be safe.

How To Reconstitute Dried Mushrooms In Soups, Stews, Gravy, And Broths

As I mentioned, and show in the video, if the dried mushrooms are to be used in a liquid that’s going to cook for at least half an hour, I just put them directly into to liquid to cook at the same time. This keeps 100% of that rich mushroom flavor in your dish and the dried mushrooms will rehydrate while it cooks.

Again, we rehydrated mushrooms today but these methods work for just about any dried vegetable. In fact, I even added dehydrated celery to the roast after I finished the video.

One Final Note – It Ain’t Perfect

I feel I should add one last thing – rehydrating vegetables isn’t going to be anywhere close to fresh. Sometimes you’ll get a little ‘chewiness‘ going on. That’s normal. If that bothers you, dehydrated food may not be the best option for you.

It’s hard to believe I had this much to say on a simple topic like rehydrating dried mushrooms but I usually have a lot to say anyway.

Why You Should Become A Prepper