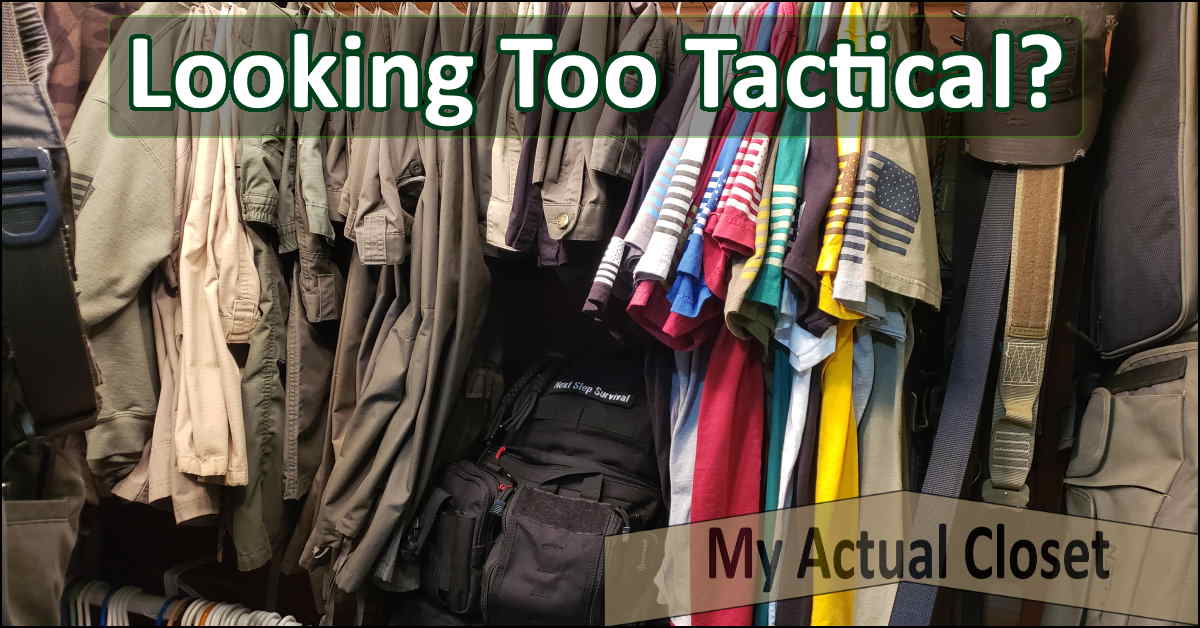 This is a common theme among the survival community – If you look too tactical, people are going to know you have the gear, food, knowledge… whatever the current topic of discussion. And they’re going to come and take it.

Is looking too tactical really a thing?

Is there really a serious danger to looking too tactical? Is going Gray Man THAT important?

Let’s break it down…

The idea is that in a true SHTF situation if you’re walking down the street with tactical clothing while sporting a military-style pack, as an example, you’re broadcasting to everyone around you that you have something they may need. Food, gear, weapons, whatever. You’re now a target.

Okay, in my opinion, the idea is solid. It’s also nonsense. It’s both right and wrong. I mean, it depends.

First of all, if you’re prepping for that level of SHTF situation – the end of the world as we know it level, you’re wrong. I can almost guarantee you’re wrong.

That is unless you’ve covered every single aspect of survival and prepping and are on the final step of your self-reliance journey.

You’re debt-free, you have enough food and supplies to handle every possible disaster that could be thrown your way. You have bug-out plans, bug in plans, first aid everything, survival skills and knowledge at every level, on, and on, and on.

You see, end of the world planning is the final step. Granted, it’s very romantic and makes for amazing books but it is and should always be, your final step of survival.

The only exception is somehow you have undeniable and rock-solid knowledge that the end is coming soon. If that’s the case, after you warn me, you might want to skip the first aid course next Saturday and start digging that bunker. Just saying.

So that’s it, looking too tactical is a non-issue, right?

No, not so fast. It ain’t that simple Joe. We need to apply some common sense, as with everything. Right?

Let’s look at it for a second…

This is fun, right?

You’re walking in the woods wearing the same clothing as the person in the airport above. And you have a tactical backpack slung across your back. You’re not wearing a plate carrier but you are carrying a rifle. Are you looking too tactical now? Because here in Michigan we call that a hunter – and we love hunters.

Okay, you’re in a large crowd of protesters because you’re favorite flavor of coffee creamer was suddenly discontinued. You’re outraged and so are your 200 closest friends. The police show up and they mean business. Do you look too tactical? Well, you’re a “special” kind of person at the very least.

Are you serious? One more?

Okay, but just one more. I have other things to do.

The “S” really hit the fan. I mean there’s no power, running water and everything is shut down – for good. You grab your go bag, long gun, strap on a sidearm, and begin trekking it to your bugout location. Is gray man important now? Is an OD Green backpack with M.O.L.L.E. webbing too tactical looking?

Here’s the truth. If police are still in the picture you just might look too tactical. If you’re in a truly lawless society (you’re not) type of event, most people will avoid you. You look like a threat, not a victim.

Or is it better to dress like a truck driver carrying your gear in a cardboard box?

To be clear, I wouldn’t walk around trying to look like a threat or a treat but I don’t see the logic our little survival community loves to stress – you’re better off looking like everyone else in every situation. It just ain’t so.

It Ain’t What You Don’t Know That Gets You Into Trouble. It’s What You Know for Sure That Just Ain’t So.

If I need to look nicer, for an event, date, or party – I have khaki and black tactical pants. I wear military issue boots daily. Tactical belt and I’m always armed. For years I’ve dressed like this.

I have NEVER been questioned about the “look“. No one has ever commented about “looking too tactical“. As a local truck driver, I’m around and interact with hundreds of strangers every week. Surely one of them would notice something off and bring it up after all these years. Wouldn’t they?

Nothing. Ever. Not one single time.

Walk around a college campus and look at what everyone is wearing. Camo and MOLLE webbing everywhere. At least here in Michigan.

Gray-man really is a thing? It can be important. If one of the scenarios above had been you’re waiting for a city bus and a riot begins developing around you, I’d want to be the fastest gray man around.

Looking too tactical just isn’t the huge deal portrayed by the survivalist masses – most of the time. It’s mostly preppers scouring YouTube videos looking for a chance to repeat something smart they heard on another video.

Once upon a time, a prepper made the legitimate observation that looking too tactical could be a bad idea. That statement stuck, got overblown, and repeated by every level of prepper and survivalist until it became fact in the minds of many. Not mine.

So the next time you really really want that tactical backpack but you heard you need to look more grey, tell them Brian from Next Step Survival told you it’s okay.

He also told you, as a hiker, those bags are far too heavy and uncomfortable to be practical but I completely understand. I love the look too. 🙂

But seriously, get a decent pack that doesn’t wreak your body carrying it across the room.

The Prepper Mindset – And Going Off The Deep End

Supply Chain Disruptions. All You Need To Know.

The Most Forgotten Prepper Task