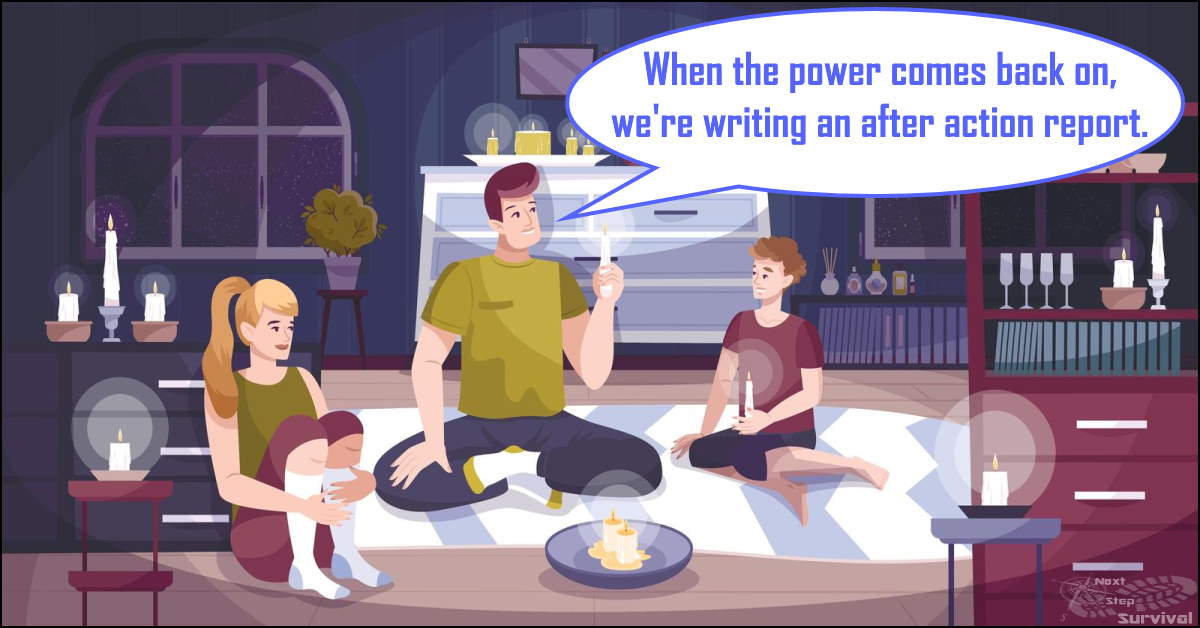 Affiliate Disclosure:
This site contains affiliate links to products. We may receive a commission for purchases made through these links. As an Amazon Associate, I earn from qualifying purchases.

We were blessed with another one-day power outage last Saturday. Not wanting a perfectly good power outage to go to waste, I have my After Action Report.

Here’s what I came up with:

We’ve done a lot of things right, but there’s always room for improvement. We experienced a small three-day power outage last year, and it inspired a two-part series on building a blackout kit. I believe that anyone that read those posts understands the level of thought I’ve put into prepping for a power outage.

Now that we just had a tiny one-day power outage, I want to make certain I conduct an After-Action Report to see what went well and what needs improvement as far as our power outage preps. As a blogger, that means I share everything with you.

We Can Heat Our Home Just Fine

When the house goes dark and the quiet sinks in, things get busy real quick. At least once you determine the power may be out for a while.

First, you sit back and take a breath. You smile and think to yourself,

Then you get started. It’s December in Michigan, so there are basically three priorities for me right now…

Since we’re preppers and already have our blackout kit, most of the running is already taken care of. Gathering flashlights, batteries, candles, radios, etc., that’s all taken care of.

We Can Cook, But It’s A Hassle

Anyone that’s been following my Off-Grid Cooking From The Pantry series knows I have multiple methods of cooking in a power outage. It’s actually quite fun.

We had already planned on cheeseburgers on the Weber grill outside. Yes, I use my grill and Blackstone griddle all year round – no matter the weather.

The issue wasn’t really how to cook, but when I’d have the time and, of course, the cleanup. What’s generally a peaceful part of my afternoon became a pain while doing the power outage shuffle.

Our Generator Is Big Enough

Several years (six, seven years?) ago, I bought a Champion 7,500-watt generator from Costco. It was a replacement for a twenty-year-old generator I just couldn’t keep fixing.

For a cheaper portable generator, this thing has not let me down. It runs everything in my home short of the central air. Last year, however, it didn’t flinch while adding a couple of window air conditioners to the load while already running the entire home.

Eventually, some day, somehow, I would love to have a whole-house multi-fuel generator with an off-grid solar system but, well, that’s going to have to wait.

In the meantime, I’ve set a goal to have the funds by next Black Friday, if not before, to buy a second dual fuel inverter generator. You know, the whole two-is-one, one-is-none thing.

Everyone Around Me Has A Generator

We all appreciate the Grey Man Theory, even though most preppers sadly misunderstand it and make poor decisions based on exaggeration, so I had to smile when I shut my generator off to refuel and check the oil.

I heard a symphony of generators from every direction. I even went as far as fantasizing a little about printing off my method of storing and rotating 60-plus gallons of generator fuel and handing it out house to house.

I live on the edge of the country and a small city. The sounds of self-reliance and the “nothing has changed” attitude were music to my ears.

It Takes A Lot Of Work

I mentioned the ‘Power Outage Shuffle‘ above and that’s what it felt like. A little anyway.

Know When The Power Comes Back On

I leave one light switch on in a room that I can readily see, so I know when the power comes back on. Everything else, I turn off, and I unplug electronics and power strips to avoid a power surge when the electricity comes back rushing in.

It’s 1:30 PM the next day, more than fourteen hours after the power came back on and my neighbor just shut off his generator. LOL True Story. Dude didn’t know the power was back on. 🤣

We Use A LOT Of Extension Cords

In my last after-action report, I said,

We have far too many extension cords that are too long (Up to 100 feet, and we didn’t have enough multiple outlet extension cords to split off into different directions. I fixed that a couple of days later with a visit to our local Lowes.

That trip to Lowes put my extension cord mania at a lower level with more connectors, shorter cords, and several splitters and power switches.

Now what I’m thinking, because I’m a solution-oriented kind of guy, is a plug & cord modular system. I’ve explained this before, that with my old ungrounded 75-year-old wiring and old school twist-in fuse box, I can’t easily add a transfer switch to safely power our home wiring.

I don’t know why this isn’t a thing, but I’m thinking about making it a thing.

Think large gauge commercial quality electrical cords in ten-foot lengths with standard 20 amp plugs. Now add in a variety of splitters and 3-outlet adapters along with LED lights. Toss in a container of some sort, maybe a canvas tote, and we have a modular power outage cord kit to fit any home.

This is something you’ll be hearing about soon because it’s one of my 2022 projects.

Our LED Floor And Table Lamps Are Accidental Preps

I talk about the miracle of LEDs a lot. It’s magic, just like the new inverter refrigerators and freezers. My generator doesn’t even feel that load climb up on it.

We had three LED stand-up lamps, two table lamps with LED bulbs, and my over-the-sink LEDs running during the power outage. Now I want more.

I want to add a handful of LED lamps to our blackout kit. Something like this (Affiliate link) but cheaper and less stupid.

I went outside in the cold, turned off the generator to top off the gas and check the oil. (That’s when I had the epiphany that I mentioned above). Five minutes after I re-started the portable power – the electricity came back on. Really?

See part two of this post, Heating Our Home In A Power Outage, next week.

Feel free to share this picture of “Our Power Was Out. Here’s What We Learned” that I put it together for you on Pinterest.

The Prepper Mindset – And Going Off The Deep End

Heating Our Home In A Power Outage

How To Start A Prepper Pantry – Updated w/ Video