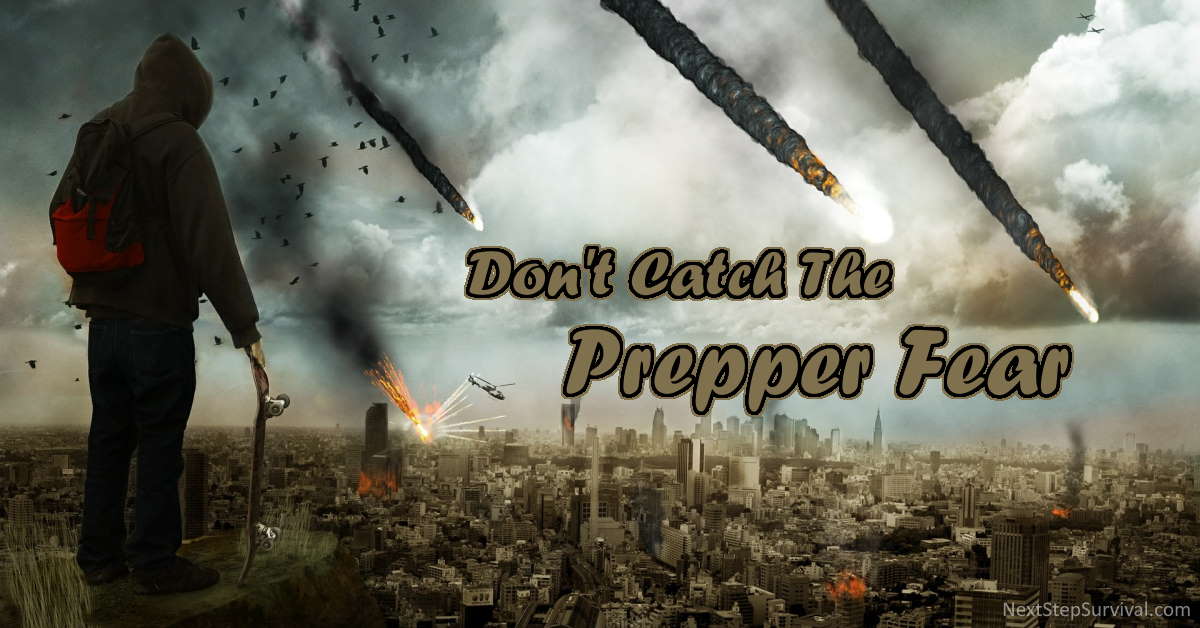 Is prepper fear really a problem? What are preppers afraid of? Are preppers crazy or paranoid? I’m going to get into these questions and more in the next few minutes.

Prepper fear can take a number of turns, most of them are not very productive, but some are.

Not All Prepper Fear Is Bad

Many, if not most of the initial motivations of preppers are based on some degree of fear. Fear can be a motivator when combined with a healthy balance.

Fear is probably the single biggest reason mankind developed beyond clubbing rodents with sticks and eating grubs under the bark of fallen trees. Without it, we would have been eaten. Not everyone can go around acting like the honey badger, we’re just not that tough.

Today we don’t eat steaming, bloated roadkill from the side of the road – we have a healthy fear of what that spoiled meat will do to us. That’s good, right? My friend Billy might be the only exception I personally know of. 😅

When Prepping Fear Can Misguide Us

We’ve all witnessed the panic buying over the last couple of years. Store shelves empty, causing even more fear-driven purchases and decisions. How many people do you think went without because fear wiped out the options?

Don’t take my word for it, can you really disagree with an all-knowing Jedi master?

Hey, There Are Good Reasons To Be Scared

All topped with 24/7 fearmongering and “The end of the world is coming” news updates. Seems like a lot of great reasons to prepare, if you ask me.

This is all subjective and opinion-based, but things get unhealthy when our actions cause a dangerous situation, undue stress, unwanted attention, or just make us look like nut jobs (That’s a scientific term).

Here Are A Few Examples Of Unhealthy Prepper Fear

You’re worried that your home is going to be broken into, so you set up dangerous booby traps to catch the bad guy. Then you find yourself explaining to the judge that you forgot the meter reader sometimes walks up to the house.

You are so sure you’re going to catch the covids that you lie and get vaccinated fifteen times. Now you have a growth on the top of your head that seems to have its own heartbeat. And now it looks like it may even be pregnant.

You think store shelves are going to dry up forever, so you spend your retirement and go into deep debt to keep a warehouse full of food and supplies. Years later, after most of the food has gone bad, you are working as a Human/Martian interpreter in a local mental hospital. But at least you have a roof over your head.

Afraid Of A Specific Event

You’re so sure a particular event is going to happen, you keep reading more about that issue until you become nice and scared. Before you know it, you begin to become obsessed with that one thing.

You avoid the more likely, less sexy events like a short-term power outage or a job loss.

Then real life happens, and you’re no better off than the people across the street that spent their free time listening to loud music and having friends over for weekend barbecues.

Actually, they may be in a better place mentally than you when things do go sideways.

You’re all set for the hoards of people coming to take away your food because you have it buried all over the woods in hidden caches.

Then you’re quarantined in your home or a local event has you locked in place for a month and your food is buried outside. Prepper fear got in the way of good judgment. Don’t do that.

You’re So Certain Collapse Is Imminent, You Drop Life For Preparedness

Unfortunately, this actually happens. People become so convinced the end is around the corner, they stop paying bills and run up credit cards. This is a drastic response to fear that it could upset life for many years.

You Just Discovered Prepping And You’re Afraid For Everyone

This is less severe but still worth mentioning. Years ago, I had a friend who discovered the Rush Limbaugh radio show. That’s all he talked about. He’d get angry if you tried to ignore the topic of politics and the evil left.

Don’t be like my buddy during his ‘Rush‘ phase. Allow people to live their lives. Not everyone is going to live, eat, and breathe prepping. And they’ll just start avoiding you.

How’s my old friend doing now? I have no idea. See how that works?

Here’s a common one. I was pretty bad myself, actually. We’ve seen the same reaction from many new preppers. They get overwhelmed and want everything right now – a well-stocked pantry, a bugout location, a garden, livestock, backup everything, and a ton of guns. You can see how this can either send someone down a difficult path or cause them to just give up altogether.

We could go on all day, but you get the point. Overreacting is dangerous. Tunnel vision is a problem. A well-rounded plan without the prepper fear can keep you and your family safe. To a degree, there’s no such thing as being prepared for everything.

And above all, don’t forget to live life and enjoy it from time to time. Otherwise, what’s the point?

Let’s Wrap Up With A little Advice

Understand where the fear comes from. Our fear may be justified. We need to think things through and let that fear motivate but not dictate. Hey, quick, someone write that down. That’s brilliant. We certainly don’t want prepper fear to paralyze us into doing nothing at all. Find that balance that works for you.

First, avoid emerging ourselves in the endless doomsday news and videos. Everything’s going to be okay. Prices are going up, many things are slow to hit the shelves, and it’s going to get a little rough for a bit. Do what you can and don’t panic.

Prepper fear is real. It’s that fear that converts many people over to the preparedness mindset. Once we get here, the sooner we get a handle on that prepper fear, the sooner we can take what we learn and help our families. Reading cult-like political posts online or watching end of the world videos isn’t going to help at all.

Find like-minded people to talk to. My buddy, Todd, has the best online community for preppers around. It’s a safe and anonymous (If you want to be) email list. I know, I had the same reservations, but email has been working out better than you’d think. Plus, he has bi-weekly Zoom meetings for anyone wanting that type of interaction.

Two things about Todd’s Exclusive Prepper Website Email Group. First, he charges just enough to keep the spammers out. That’s important. Second, it’s not always available for joining. There’s a notification list you can sign up for, and he’ll let you know when it’s open again for new members.

Last thing – I’m not affiliated with the group other than being a happy member and I get nothing by recommending the list to you other than the satisfaction that I might help you. Ok, let’s move on.

Funny, a lot of my posts seem to end with linking to the same few articles. I had no idea they’d become such key steps to survival (see what I did there?) when I was writing them. So here we go:

Related: The Prepper Mindset – And Going Off The Deep End

Next Steps: More in our Prepper Series:

This seems like a good time to ask for your trust and offer you a free subscription to our weekly email list (Not to be confused with Todd’s list mentioned above). You can unsubscribe anytime, and I won’t hammer you with emails.

Share the post? I try to get make it as easy as possible by posting it across social media first. You can simply share those posts.

How To Start A Prepper Pantry – Updated w/ Video

The Most Forgotten Prepper Task

Dehydrating Green Onions – From Our Garden To The Prepper Pantry – Video