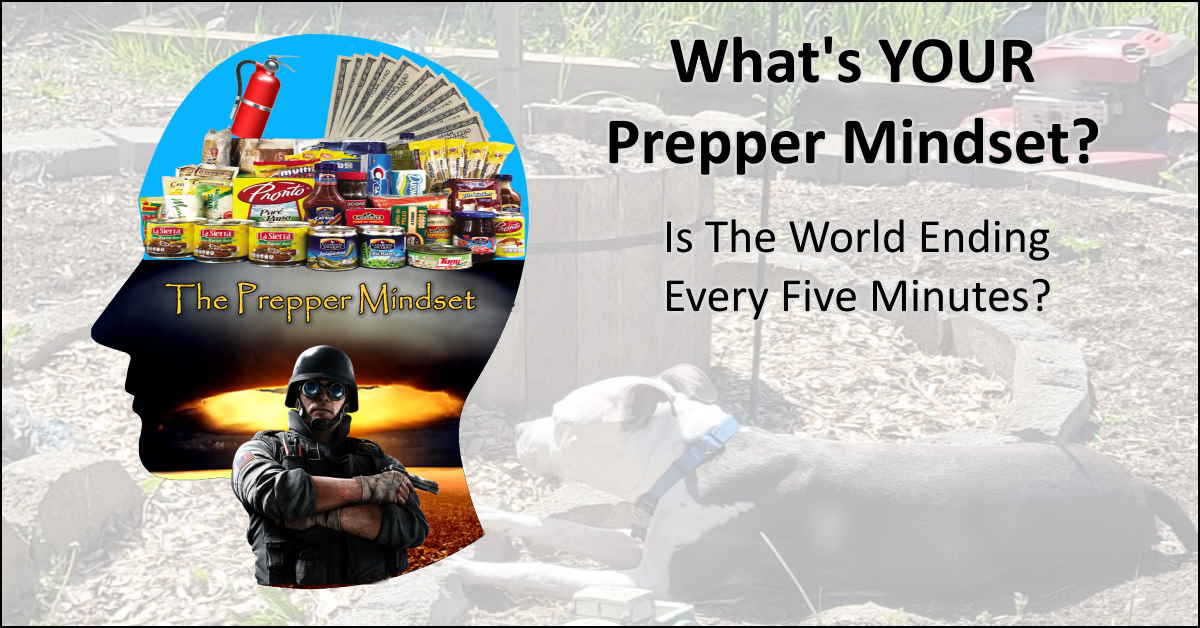 In this article, I address the basic prepper mindset – from my perspective, and how to avoid going off the deep end.

Being a prepper is as diverse as being a guitar player or a hiker. The degrees of each varies, along with varying meanings by a wide range of people. A prepper might be a grandmother putting up jars of green beans from her garden all the way to the doomsday prepper hiding in their bunker.

Hint: One of those may have gone off the deep end in my opinion. Oh, just to be clear – everything I write here is only my opinion.

Come on grandma, what are you so worried about. LOL

Prepping Does Not Define Me/Us

I am a prepper. I’m also many other things, my prepping doesn’t define me any more than my day job or other hobbies. In other words – I haven’t become “obsessed” in an unhealthy way.

I’m also a blogger and my favorite thing to blog about? Yes, survival. A couple of weeks ago I was being interviewed by a podcaster in the niche of RV camping. He introduced me as a “survivalist.” I cringed a little and quickly explained that while I believe in surviving when possible, I’m not a survivalist.

Why does any of this matter? It’s about moderation and a healthy prepper mindset. Is [Insert any food here] bad for you? Most honest doctors would say, “Everything in moderation.” Don’t try to live on a bacon diet exclusively because that may not be a healthy diet.

Try to think of things outside of prepping and enjoy the life/lives you’re trying to protect and you’ll probably not turn into a prepping nut job that everyone wants to run away from the moment you open your mouth. You know, just like those sports nuts or politically obsessed.

Sure, it could get really bad if you became completely unhinged and started planting mines and booby traps around your compound perimeter but that’s not the danger I’m referring to.

The real danger, the way I see things, is focusing on that end of the world as we know it (TEOTWAWKI) scenario while ignoring the more likely events such as a severe storm or job loss.

I follow many blogs and podcasts, as well as interact with prepper groups of every level. Almost every day I see, hear, or read about someone installing an EMP shield on their car or building a faraday cage, or ranting about another prepper looking too tactical.

While there’s nothing wrong with preparing for an EMP or an economic collapse, they’re probably not the best first steps as a prepper.

A Healthy Prepper Mindset Isn’t Easy And Is Often Boring

I get it, I really do. I got wrapped up in that YouTube abyss in my early days. China was going to destroy our economy or North Korea was going to launch an EMP off our coasts hidden on container ships. I thought we’d eventually need to go deep into the woods and live off the land. While that seems extreme to me now, it’s certainly not boring.

As preppers, we have a lot of great resources out there (And here on this blog – just sayin’) to help us develop a viable plan and get started, as well as the more advanced things like planning for that EMP or those pesky UN white hats that are going to confiscate your ARs.

What good is a hidden survival cache of knives and ammo out in the woods when you lose your job and can’t keep the power on or feed your family? What good is that expensive night vision gear when you’re spouse or child has a medical emergency and you have no emergency fund or haven’t prepared for a contingency like that?

BTW, anyone that says they’ll use it [gun/s] to take what they want is not a prepper, they’re a criminal.

Or there are rolling shortages of food and supplies and you don’t have a month’s supply of food and the necessities? That can’t happen, right? I’m sure the vaccine passport will happen first, along with riots followed by nationwide martial law. We need guns and ammo, not food and water. Right?

Don’t Stress Over That Which You Have No Control

Do you see the prepper mindset yet? It can mean one extreme to the next but the smart prepper, in my opinion, prepares for the most likely events to the best of their ability without sabotaging other areas of their lives and not stressing over the things they have no control over.

At least in the beginning stages of your prepping journey. If the zombies don’t get you, I’m all for preparing for TEOTWAWKI once you have the basics covered. Let’s just be able to feed and protect our families first. Make sense?

I left Facebook over a year and a half ago. One reason was the constant arguing and obsessions so many people seemed to have developed. It almost seems like people have developed a mental condition that doesn’t allow for rational evaluation or tolerance for opposing opinions.

That unhealthy mindset is such a waste of time. That constant stress over things beyond our control is pointless.

Rather than fighting to get the orange man back onto the throne, wouldn’t a smarter prepper mindset have us storing safe water and working on backup power? Having a solid evacuation plan in case of a fire rather than running fifteen apps on our phone looking for the next crippling solar flare? Mindset.

The Best Prepper Mindset Designs The Best Plans Of Prepardness

Remember over a thousand words ago when I said prepping is diverse? We rely on our prepper mindset to determine a plan of action – and if we even take action at all.

The diversity of prepping is important. We need flexibility based on our location, situation, personal skills, and responsibility.

Related: What YOUR Preparedness Action Plan Should Look Like

And we need the ability to “pivot” when necessary.

The best prepper mindset doesn’t default to the worst-case scenario and it isn’t influenced by those that cry wolf on a regular basis. The best mindset is based on reality with access to a little common sense.

Let’s Get Real For A Moment – This Very Moment

Right now we know prices are likely to increase. We see it right now – every day. We know there are going to be shortages – we see it every day and we’ve lived it for over a year now. We know, as a nation, the economy will likely take a hard hit – trillions spent and even more lost.

With all that on the table, things we know for a fact, why in the world are so many people that call themselves preppers focusing on the most unlikely scenarios when they would struggle to come up with thirty days of emergency food?

This is what I am seeing from good people that I like and want the best for. I’m not saying these people are stupid – they’re certainly not. I interact with many of them enough to understand that.

That Problem Is EXACTLY Why Next Step Survival Exists

I’ll be the first to admit that I could have done a much better job at it but it’s those rabbit holes that misguided me, in the beginning, are why I started this website. I believed a step-by-step plan was the solution. But that whole diversity thing.

Stay with me as I work on helping you find YOUR best prepper mindset so you can plan your best preparedness action plan. Things are just too unstable right now to waste our time and resources preparing and planning for the wrong events.

Looking Too Tactical – Is It Really That Dangerous?

Survival Podcasts I Listen To

Back On Through Sometime In November: Sam’s Club Membership Under $20