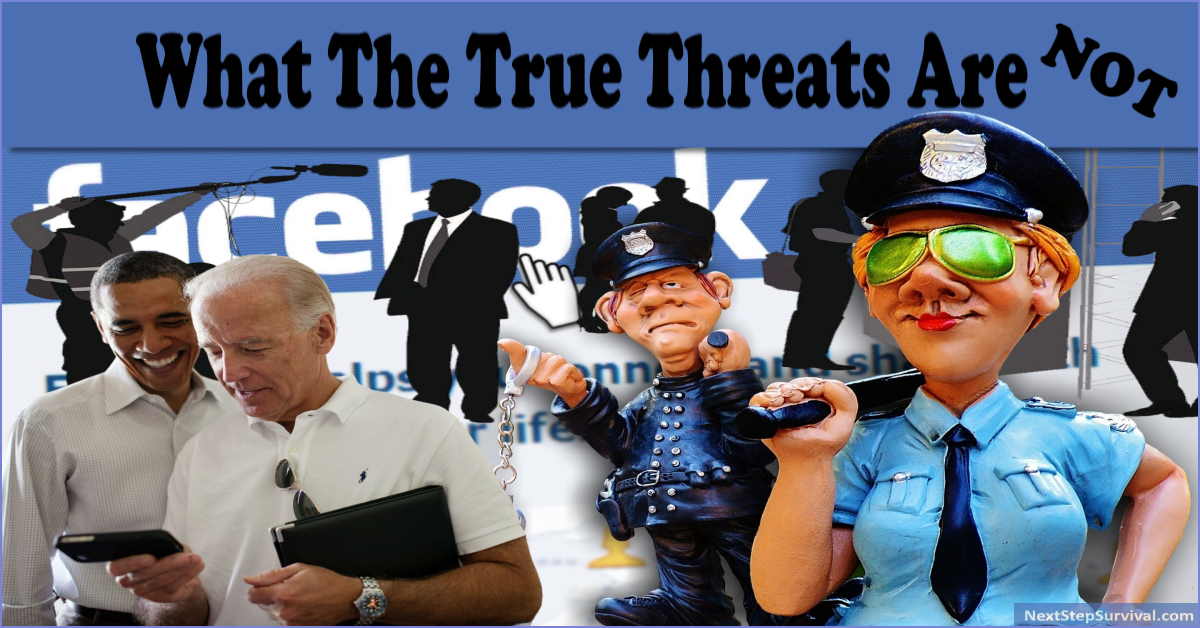 I don’t do many of these commentaries, not on this blog. About every six months or so. I try to keep things somewhat educational and productive but nearing a new year, I feel we could use a wake-up call.

So this will be half rant and half reasoning. I’ll let you decide which and whether any of it is worth reading. Feel free to let me know your thoughts in the comment section below.

Over the last several years, we’ve learned the true threats and where they are. But, no, this isn’t a political post. You’re on the wrong blog for that.

In this article, I want to take an honest, potentially painful assessment of what we’re facing and how to best prepare for the future.

Covid and the government’s response to it have only confirmed what we already knew or at least suspected.

I honestly doubt that any of us knew just how far big brother would go and how many laws they’d violate for control, but now we do. We know now. But these are not the true threats.

The media was another confirmation for most of us. Again, the degree to which mainstream and social media would stoop for their agenda has taken even the most cynical of us by surprise. Still, these are not the true threats we need to address.

Here’s the painful part. Ourselves. As in the preparedness community, we have quickly accepted the opposite narrative at every turn.

We have fallen victim to our own bias, often allowed to turn into hate, which became a distraction from our prepping goals. True threats? Not if we refuse to buy into the hype.

Fear is the path to the dark side…fear leads to anger…anger leads to hate…hate leads to suffering.”

Anyone that has spent more than five minutes on some of the newer social media platforms, and is willing, to be honest with themselves, knows that it’s the same road, just in the opposite direction. The same rhetoric, only with another message. A different political agenda.

What does all this mean for our future as preppers?
For the preparedness community?

It tells us we must get our heads on right—separate politics from our preps. Stop listening to the doomsayers profiting off the fear tactics by killing us off each week with another apocalyptic scenario.

For years, we’ve had a hyped-up economic collapse every week. Chickens will be destroyed, beef will be dead, bugs will be our staple, the government is setting up kill camps, and the price of gas and diesel will make the great toilet paper shortage of 2020 look like a walk in the park.

It’s not what’s true in most cases. It’s to what degree. The extremes are affecting our preparations. We’re reacting rather than being proactive.

In many cases, we’re allowing fear and mistrust to rush us into mistakes and poor choices. Sure, the lack of trust doesn’t go unwarranted. We’ve been lied to so often we’d be idiots to believe a word the government or the media says.

I hope that in the coming years, beginning now, 2023, is that we will stop playing victim to the sky-is-falling mentality and start systematically and calmly preparing for whatever the future holds.

We want to stay up with the news, but we don’t want to buy into the hype, hook, line, and sinker from either side.

Here’s the painful truth. If we were more prepared, as most of us should be, little of the news would make us do dumb stuff.

Don’t let a YouTuber or blogger convince you to double down on gear, supplies, or training based on their eighteenth rendition of destroying the world as we know it.

How Bad Are Things Going To Get?

Who knows? I guess it depends on who you are and where you are.

What I do know, what we all know, is the better prepared we are, the more likely we are to stay the course and keep afloat.

The prepper that is out of debt and has a year’s supply of food and supplies isn’t losing sleep because inflation is out of control or the price of eggs is finally flattening after an all-time high[1].

Of course, the well-prepared prepper doesn’t like it, but the stress level is way down from those talking a good game who failed to take action.

Every warrior knows that the true threats don’t come from our enemy. They come from our reactions or lack thereof. If we allow the attacks of our enemy to dictate our actions, we’ve already lost.

Moving Forward With Our Curse Of Knowledge

We know we can’t trust the government. They’re up to no good. We know the republicans will do no better. We know we can’t believe a word we hear from the media. We know many in our community aren’t looking out for our best interests, only theirs.

We’ve identified the enemies, we’re under attack, and we know the true threats. We’re armed with the truth, allowing us to move forward in the right direction. You thought I was going to say, and the truth will set you free. 😅 My mom always said I was different.

I hope we can get back to the basics. I hope we can separate our political opinions from what’s essential for our families.

Evaluate your situation, do a threat analysis, and take the appropriate steps based on your risks and level of preparedness.

Leave out the bug factories, the climate agendas, the great reset, the Twitter files, and the Trump fight. While all are worthy of reporting, none of it matters right now. There’s nothing we can do about it short of arguing with other people who have no control.

Yes, the world’s out of control. They don’t know a boy from a girl, whether unborn babies should live, or whether suicide should be a medical option. The border is little more than a speed bump, and public schools are indoctrination centers. Privacy is a dream, and 1984 is no longer a thing of the past.

The more self-sufficient we become,
the less that nonsense affects us.

So when Mic’s feeding his chickens, do you think he’s wearing earbuds listening to a right-wing political podcast and fuming under the collar about the Twitter files?

I’d have to ask him, but I doubt he’s losing any sleep over the daily news. I’m sure he’s on top of what’s passing as the news. It just doesn’t ruin his day, would be my guess.

Let’s Recap And Look At Some Solutions

To recap, we know the news is biased, no one can be trusted, and everyone has an agenda. We also know we need to understand the narratives and what’s going on in the world and somehow be like a statue and not allow it to affect our decisions. Ha Ha, that should be simple. We know our privacy is disappearing, and we’re losing our Freedoms to tyrannical governments and corporate leaders.

The answer is so easy.
Doing it is another story.

⒈ First, Recognize House M.D. was right, and everybody lies.

⒉ Second, understand that everyone has an agenda and cannot be trusted.

⒊ Third, we still need to be aware. Ignoring current events is not the answer. Find a balanced news source, don’t obsess over any of it, and take everything with a grain of salt.

⒋ Four, base your preparedness decisions on your situation, location, abilities, and goals. Less on the news flavor or panicked YouTube prepper of the day. Buying up expensive gas in a panic, for example, because we keep hearing it’s going up to ten dollars a gallon or hard to find, is letting the hype steer our preps.

We lose focus when we let
fear and panic into our
decision-making process.

How many people ran to the stores last week because we had a life-threatening, world-destroying storm coming in? Bread, milk, batteries, and eggs quickly ran out in the stores. Well, it is December. The news hypes the potential impact by 2.5, and their tape measure exaggerates as much as they do. The prepared was ready for any impact and didn’t bother stressing over it.

⒌ And five, apply a little common sense and trust your instinct. It wouldn’t hurt to find your circle of trust. More on joining and building communities soon.

Alright, thank you for hearing me out. I can resist the urge to rant until at least July, maybe even longer. So now that I’ve saved the prepper world from a painful path of self-destruction, we can start prepping for all the right reasons again. Isn’t that a nice feeling?

Next Steps: Becoming A Prepper – Take On A Preparedness Mindset

Featured image contributors: Alexa and Welcome to All ! ツ from Pixabay and  Jaskamal of CleanPNG.

National Preparedness Month 2021 – Choose From Over 75 Steps To Take